Being my first year at re:Invent I wanted to give my insights regarding the conference. First and foremost….like most conferences this size….WEAR COMFORTABLE SHOES! With 50K+ attendees spread across 5 different venues up and down the strip, you will definitely hit your step goals for the week. Day 0 count = 16,230 (8.03 miles).

Compared to some conferences I have been to, AWS pulled registration off beautifully by allowing you to register at Terminals 1 and 3 at McCarran International Airport plus the Aria and Venetian. I only had to wait about 5 minutes at the Aria. The SWAG pick up at the Venetian was a snap and there was even a place to try on the famous AWS re:Invent hoodie beforehand. No more guessing on the fit.

Next, it was back to the hotel for some rest before the night’s activities. I can attest that while at the conference, use the shuttles!!! Saves your legs and feet, you may even have some interesting conversations with others along the way. Once back at the Venetian, I waited in line for what I thought was going to be a cheap easy way to get a free meal…..the Tetonka Challenge! AWS re:invent was at it again with trying to break last year’s Guinness World Record for the largest chicken wing eating competition.  400+  waited in line to compete to see who would take home the crown. I met some great people as I waited in line but I am sorry to say that after only 22 wings I bowed out. Something about soggy-ish wings didn’t quite hit the spot. The winner ate 70+ which is absolutely insane! I even got my one second of fame. You can see me standing behind the man in the green jacket off to the left when they awarded the winner.

Coupled with the Tatonka Challenge were Portlandia’s Carrie Brownstein and Fred Armisen’s best attempt at live comedy. In my opinion, it fell pretty flat but at least they tried. They were the on-stage cheerleaders for two more world record attempts in the largest Air Drum Ensemble (Phil Collins’ “In the Air Tonight” was selected for the Air Drumming) and Most People Lighting Glow Sticks Simultaneously. I have no idea if we broke all three but I think we did!! It was a good time but if it weren’t for the Tetonka Challenge I would not have missed much by not attending. Let’s see what Day 1 brings!! All I know is that I will not be eating wings for the rest of the week!!! 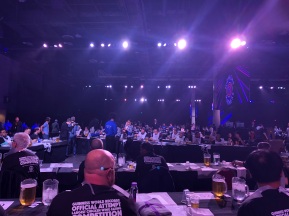 Helping to successfully implement the components of the VMware Horizon Suite and beyond....